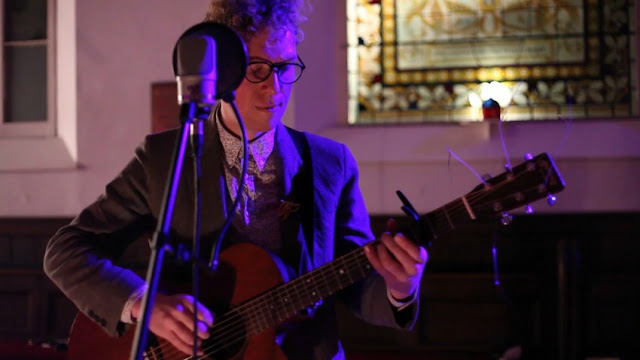 Brighton-based producer Night House blends electronic beats, orchestral arrangements and lyric-driven songwriting, drawing from a wide range of influences such as the electronic work of James Blake and Radiohead and the folk harmonies of Sufjan Stevens, Joni Mitchell, and Bon Iver.

Night House has a sound that is almost spiritual; beautiful, uplifting ethereal harmonies meld with modern electronica to create a warm, intelligent sound that is reminiscent of Bjork and Wild Beasts, with lead singer Nicholas Williams described as a “falsetto Tom Waits (Radio Reverb)”

Orchestral electronic folk. Despite my love synths, electronics and big arrangements, for me at the core of the music it’s got to be a lyric-driven song.

One day, pretty early on in recording the album, Robin (cello) and Alfie (double bass) came to my home studio to work on the track Unfold. It was the first time they’d heard the song and immediately they came up with this dissonant, warm orchestral chords which swelled in with my synth and vocals. By the end of the day, we’d arranged and fully recorded the entire song. This mix of orchestral folk and icy electronics formed the basis for much of the sound of the album.

At the moment I’m loving my new Prophet Rev2, which has just replaced my Fender Rhodes (it got too heavy) as my main keyboard in the live setup. I’d be lost without my Roland Tr8 for making the beats, but I’m still drawn back to my acoustic guitar and mandolin. Basically I have too many instruments and need them all.

Recently I’ve really enjoyed taking inspiration and themes from literature. I’ve got a new song which is directly inspired by the fantastic book, A Home at the end of the world.

Supporting both Ben Howard and Willy Mason in the same night was a definite highlight but the big one for me is the first EU tour. The first show was this house concert in a sohren, a tiny village near Koblenz. We didn’t know what to expect but when we pulled up we saw that they’d made this small festival stage with a huge Night House banner. They laid out trestle tables outside and the whole village ate together before we played. It was pretty magical.

I’d be too scared to collaborate with any of my all-time heroes in case they hated my input! But if I’d love to get in the studio with James Blake, see how we do some of his production.

I feel like I only had a couple of talents when growing up, one was music and the other was acting… so out of frying pan and into the fire!

Our debut album ‘Everyone Is Watching From Afar’ has just been released worldwide. We were touring the UK to promote it but these shows have been postponed by a coronavirus. But this gives me a great time to finish mixing the live record we’ve recorded and start recording album 2.